Memo: Chinese Drugs Containing Human Foetuses, Hepatitis B could be in circulation

An internal memo is circulating on social meida that suggests the South Korean Ministry of Food and Drug Safety has siezed 2,751 Chinese drugs/capsules containing remains from foetuses, infants and flesh imported into the country by Chinese nationals.

The seizure was done by the South Korean Customs Service on September 30, 2018, according to a Nigeria/China/South-Korea/Multilateral/Social document prepared by the National Intelligence Agency (NIA) headquarters in Abuja and obtained by SaharaReporters.

The document, dated October 12, 2018, noted that the manufacturers claimed that the drugs/capsules could boost stamina, cure cancer, diabetes and some other diseases, and were smuggled in suitcases and through international mail.  Also found in the capsules were 18.7 billion viruses, including Hepatitis B.

The NIA has alerted the Federal Ministry of Health, National Agency for Food and Drug Administration and Control (NAFDAC), National Drug Law Enforcement Agency (NDLEA), Standards Organisation Of Nigeria (SON), Nigerian Postal Service (NIPOST), Customs and other relevant agencies to step up efforts in monitoring the importation of drugs from China into Nigeria.

“The South Korean Customs Service on 30th September, 2018, revealed that it had seized two thousand, seven hundred and fifty-one (2,751) Chinese drugs/capsules, containing human remains from fetuses, infants and flesh imported into the country by some Chinese nationals.

The manufacturers claimed that the drugs/capsules can boost stamina, cure cancer, diabetes and some other terminal diseases. The capsules were smuggled in suitcases and through international mail.

South Korean Ministry of Food and Drug Safety indicated that eighteen billion, seven hundred million (18.7 billion) viruses, including hepatitis B virus, were found in the capsules. It stressed the making of the human-remain drugs and consuming them are crimes against humanity, which can also lead to serious health challenges. 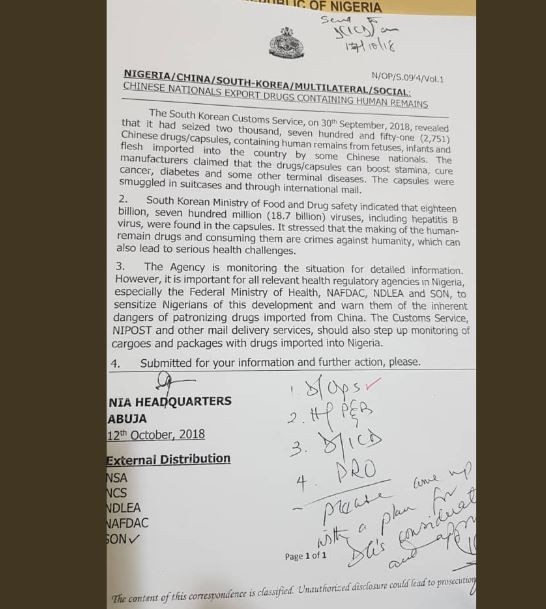 The Agency is monitoring the situation for detailed information. However, it is important for all relevant health regulatory agencies in Nigeria, especially the Federal Ministry of Health, NAFDAC, NDLEA and SON, to sensitise Nigerians of this development and warn them of the inherent dangers of patronizing drugs imported from China. The Customs Service, NIPOST and other mail delivery services, should also step up monitoring of cargoes and packages with drugs imported into Nigeria.”